Take an additional 15% off entire order by entering promo code: NINJA15 at checkout 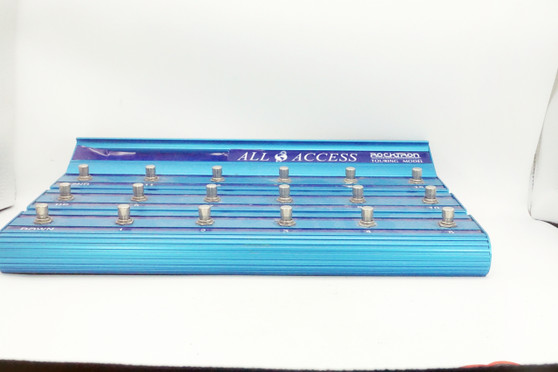 *Please note: some screws are missing from the bottom cover.

More rugged and more powerful, the All Access again proves that Rocktron is the leader in technology for guitar players. The All Access as a stand-alone foot controller can be completely customized for your gear requirements. It can be set up to your specs in three operating modes: Bank Mode, Song Mode and Remote Mode.

Song Mode allows up to 150 songs to be stored with 15 presets per song. The 10 sets allow placement of 50 songs per set.

Remote mode automatically programs the footswitch to match Rocktron remote-compatible units. Titles and individual switch functions will automatically program and continuously update themselves on both the rack unit and the All Access foot controller. Functions like tap delay, mute, boost and effects on/off instantly appear when connected to a Rocktron remote jack without any programming.

Other All Access features include 18 metal Switches for positive tactile feel and long life; large 16 character fluorescent display for custom titles and easy programming and clear visual on any stage; LED indicators that light for every switch at all times as an on/off status indicator and a dimly lit preset number (all 18 switches) so stage blackouts will not hinder pedal operations; seven pin MIDI Out jack to allow phantom powering from your rack; 120 presets which can include over 36 MIDI commands per preset to be transmitted amongst the 16 MIDI channels including "toggling" control change commands; MIDI filtering, dump/load, SysEx, select 0-127 or 1-128 transmit operation; and the fast, easy copy function allows you to copy any preset, bank, song, or set to another respectfully.